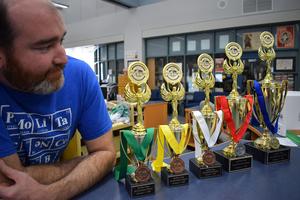 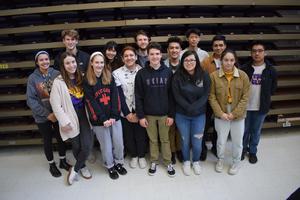 Many of you may have heard the recent news about an event called Science Olympiad, and the medals Ukiah Unified students have been winning all over the western United States, but what is it?

Science Olympiad is an American team competition in which students compete in events about various scientific disciplines, including earth science, biology, chemistry, physics, and engineering. The competition functions much like a football or soccer game, requiring preparation, commitment, coaching, and practice throughout the year.

Each school-based Science Olympiad team features 15 students who cross-train for a variety of events in their skill set, with some school clubs having more than 75 members. Thousands of middle school and high school teams from around the United States compete each year.

A typical Science Olympiad competition consists of 23 team events in each division (Division B is middle school; Division C is high school). Each year, a portion of the events are updated to reflect the changing nature of fields like genetics, earth science, chemistry, anatomy, physics, geology, mechanical engineering, and technology.

Science Olympiad encourages a wide variety of students with diverse skills to get involved by combining events from many disciplines. Emphasis is placed on active, hands-on group participation. Through Science Olympiad, students, teachers, parents, and administration bond together and have the opportunity to work toward a shared goal.

Although some events in the Science Olympiad are based on individual achievement, all events involve teamwork, group planning, and cooperation. Collaboration is a required skill in most scientific careers today, so Science Olympiad encourages group learning by designing events that build vital teamwork skills.

On February 8, 2020, Ukiah High School hosted a Division C Science Olympiad Invitational. Eighteen teams with approximately 300 students participating in 23 events. The Ukiah High School team placed 5th overall against some tough teams from around our region, including the Bay area. This particular invitational had an interesting detail that speaks volumes about our community. Thanks to local sponsors, it had the largest cash prize pool of any competition of its kind in the United States! Thank you Do It For DJ Foundation, Quest Mart, Bradford Foundation, Holstine family, Fetheraton Veterinary Orthopedics, Linkenheiner LLC, North Coast Resource Management, Terrazas sisters, Duwe family, Ukiah Teachers Association, Rhodes family, and Gipson/Sacard family for all of your support.

Science Olympiad is an impressive nation-wide organization. There are fabulous prizes at the national level. Kara Fan from Mesa Verde Middle School in San Diego won $25,000 in the 2019 3M Young Scientist Challenge for her liquid bandage innovation! There are similar challenges and prizes available each year. Students who want to improve their skills can attend the Science Olympiad Summer Institute at the Pointe Hilton Tapatio Cliffs Resort in Phoenix, AZ, on July 13, 2020.

If you want to see what the Science Olympiad is all about, there is a middle school invitational being hosted here at Ukiah High School all day next Saturday, February 22, 2020. There will be 30 Division B teams with 450 students and at least that many parents and fans from out of town here competing in 23 Division B events. The awards ceremony will be at 4:00 p.m. in the UHS Cafetorium if you want to check it out.

Our teams have been working extremely hard, and if they have it their way, they will compete in the 2020 Science Olympiad National Tournament on Wednesday, May 13, 2020, in Raleigh, NC. Contact Adam Lane, Pomolita Middle School Science Teacher, at 707.472.5408 or alane@uusd.net if you want to volunteer or have questions. Visit www.norcalscienceolympiad.com/ for more information.