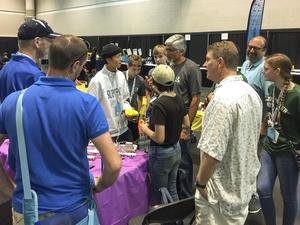 SeaPerch is an underwater robotics program that equips students with the resources they need to build an underwater Remotely Operated Vehicle (ROV) from a kit comprised of low-cost, easily accessible parts. To win the competition, students must use their knowledge of physics, engineering and mathematics to improve the “bot” (as they call it) to increase its speed and mobility as they maneuver it underwater.

Just weeks before the competition, their advisor, teacher Chatnaree Upton, gave birth to her first child and began her maternity leave; however, according to UHS Principal Gordon Oslund, “Ms. Upton had always encouraged the students to work independently and be self-sufficient, so her departure did not derail them.” Teacher Patty Halpin stepped in as the SeaPerch advisor, and both Halpin and Oslund accompanied the students to the East Coast for Nationals.

Oslund said he was inspired by the hundreds of students who reached such an elite level of engineering and problem-solving. It was also heartwarming because “you could see they’d found their group,” he said. He likened the connection among SeaPerch competitors to the common bond athletes sometimes feel: even if they never competed on the same team, they have similar interests and experiences with regards to their sports.

The UHS teams were the center of a lot of attention because they had used 3D printers to create their ROVs rather than the more common PVC pipe. Because 3D-printed ROVs are not waterproof, the students incorporated a foam-filled capsule for ideal buoyancy.

During the competition, students were judged on three things: the engineering journal, the obstacle course, and the challenge course. The journal chronicles each team’s process in designing and building the ROV. The obstacle course requires the ROVs to be maneuvered underwater through 18-inch rings as quickly as possible. The challenge course is the most difficult event, requiring the ROVs to open an underwater vault by pressing a lever, picking up weighted wiffle balls and placing them in small cups, moving large, somewhat buoyant masses to a specific location, and activating a sensor using a magnet.

Oslund noted that in addition to acquiring technical skills, the students who participated learned many other important lessons. He said, “They worked as well as many professional groups I’ve seen, transferring their meticulous and precise process of building a bot to their teamwork and communication. They put their egos aside and assigned tasks according to each person’s strengths.”

They also benefited from other aspects of the experience. He said, “Some students had never been out of Northern California, so exposing them to Washington DC and the University of Maryland helped open their eyes to what’s out there, what’s possible.”

Both teams supported each other. Their goal at the outset had been a top-ten finish. When the H2Bros team members had a disappointing result in part of the competition, they immediately began rooting for the Torque Team to achieve the goal (which it did).

Team members thanked community members and the school district for funding their travel, lodging, and entry fee, with a special thanks to Sports Attic 2 for hosting a fundraiser, and Oslund welcomed UHS students interested in robotics to check out the STEM club when school starts again in August. “The team is already gearing up for next year, looking forward to recruiting new team members,” he said.