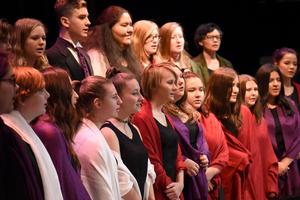 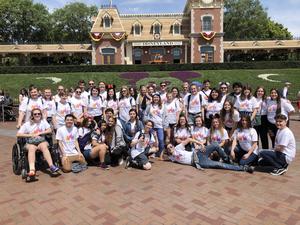 “It was nice to go down to Los Angeles and have our students validated by the pillars that validate all the best programs in the state...,” said Joshua Small, UHS Vocal Music Director.

These are both fantastic achievements, considering the challenges the groups faced before they could attend. The first challenge was the roughly $25,000 price tag for the event, which the students, parents, and staff were able to raise. The second challenge was transportation. On the day they were to leave for Southern California, just minutes before their scheduled departure, the company that had contracted to bus them to their event suffered a catastrophic breakdown and had to bow out. The students thought their trip was canceled. Then UHS Vocal Music Director, Joshua Small, stepped up and organized parents and volunteers to shuttle the choir students to their competition.

“It was nice to go down to Los Angeles and have our students validated by the pillars that validate all the best programs in the state. Our students learned that music is more than just a one-time performance and done. It’s a living and breathing entity. They understand the professionalism required to be in music and performing arts in general. When you get on stage, it’s “go time!” It’s time to focus. It’s hard work. I think they all got that because they all stepped up for the occasion. I was really impressed and so were the judges,” said Joshua Small, UHS Vocal Music Director.

In addition to vocal skills, this trip and this experience taught the students many valuable lessons. “I learned on our trip that in life, you face many obstacles, but, regardless of that, you just have to get the job done sometimes, even though it doesn’t come very easily.  As performers, it’s something you have to work through and just do your best,” commented UHS Choir Student, Karina Alvarado.

Despite the setback, both choirs and their parents arrived in Orange County with time to spare before the competition.  Each group prepared a set of beautiful, rigorous, and inspiring choral music for their festival performances. UHS Concert Choir, a non-auditioned choir of 30 voices, performed “Oceans and Stars,” “Winter’s Cold,” and “Nine Hundred Miles” and received the judges Silver rating.

UHS Senior, Chris Havemann shared, “This trip helped me realize I want to continue singing going into college, beyond high school choir. It allowed me to see into the future a little bit if I continue singing.”

The UHS Vocal Ensemble, a 23-voice auditioned group, opened their set with “Dies Irae,” then “Homeward Bound,” and closed their set with “Battle of Jericho,” accompanied by Janice Hawthorne-Timm and directed by Joshua Small.  For their superior musical preparation and performance, the Vocal Ensemble was awarded a Gold rating, and are now eligible for the coveted Judges’ Invitational for the next three years where they will compete against the top choirs in the United States.

“We worked so hard, everyone in this group really put in the effort and out of that came an awesome performance and we won gold. I am very proud of that. It’s crazy what you can achieve when everybody just does their part,” said Jacob Lauterwasser.

When students were asked about their teacher, Joshua Small, there was a common theme of respect. “Mr. Small is one of the coolest things that has happened to UHS in a long time,” said Hillary Simms. Kaya Hills commented, “I’ve been in Mr. Small’s class for three years now, and throughout the entire time he’s been really involved with the students, he puts his all into our choir.” Carlos Valentine Campos added, “Mr. Small is a great teacher; he never judges people. He believes everybody is equal.”

Ukiah High School Vocal Music Ensembles travel and compete around Northern California with the goal of recognition as top contenders in their respective categories. If you have a student at Ukiah High School who is interested in choir, please urge them to sign up for UHS Concert Choir or audition for Vocal Ensemble. Follow this link to see and hear the Concert Choir: https://youtu.be/USBm_ogE588. To see and hear the Vocal Ensemble, use this link: https://youtu.be/pf0CoVDvJWs.

If you know of a student looking for ways to keep singing this summer, Ukiah High School Vocal Music Department and The City of Ukiah Recreation Department are offering a two-week Summer Choir program. In this program, students can learn new songs and choreography in a summer camp environment singing with friends new and old! Visit www.ukiahivocalmusic.com for details.