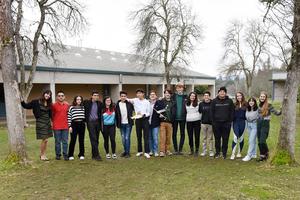 Chatnaree Upton, UHS Mathematics and Physics Teacher commented, “I am very proud of our team. We competed against some of the top teams from Southern California on this trip and our students did great! This is a tough competition and a very long and exhausting road trip, but we learned a lot that will help us to be a stronger team in our upcoming competitions.” Mrs. Upton went on to mention how instrumental parents are when it comes to Science Olympiad. “We couldn’t do this without them,” she added.

Science Olympiad is an American team competition in which students compete in events about various scientific disciplines, including earth science, biology, chemistry, physics, and engineering. The competition functions much like a football or soccer game, requiring preparation, commitment, coaching, and practice throughout the year. Each school-based team brings students who cross-train for a variety of events in their skill set, with some school clubs having more than 75 members. Thousands of middle school and high school teams from around the United States compete each year.

Learning to deal with logistics is a big part of the Science Olympiad experience. The Pomolita team had to get their projects and supplies from Ukiah to Seattle and back. Projects were covered and wrapped while other necessary items were bagged. Then everything was transported for about 24 hours through rainy conditions to Seattle. Additionally, any tools, chemistry kits, and other restricted gear had to be sent on the vehicle to avoid going through airport security.

Long trips like this always have a certain amount of last-minute, unexpected obstacles to overcome, which is another excellent opportunity for students to learn. Shortly before it was time to leave for the Seattle competition, organizers realized that 40 people were going, and only 37 seats were available to the airport. With a few calls and a little luck, an additional car was quickly organized, and the entire team made it to their flight.

The Los Angeles team had obstacles too. They packed all of their projects and builds into three cars for the long trip south. When they unpacked, some of the builds were damaged, and students stayed up very late working to repair projects and get ready for their competition the next day.

“When there is a problem, we always find a way to make it happen for the kids,” said Adam Lane, Pomolita Middle School Science Teacher. “I am very proud of the hard-work and hard-thinking our students have put in to get ready for these Science Olympiad tournaments, and congratulations to our students that placed.”

Experiences like Science Olympiad tournaments offer our local students a chance to experience life outside of Ukiah. On Sunday in Seattle, the Pomolita/UHS team visited Pike's Place Market and played tourist. Some went shopping, while some wandered around site-seeing at famous spots around the area and on the waterfront. The Seattle Great Wheel, the big Ferris wheel at Pier 57, was also a favorite attraction for some students. The UHS team stopped in Santa Cruz, CA, on the way home from Los Angeles to break up the long drive, where they got to enjoy the beach and a little time on the Santa Cruz Beach Boardwalk.

Middle and high school teams from around UUSD will be competing in Science Olympiad tournaments over the next several months. Contact your student’s school for more information, and please visit www.soinc.org for schedules and details about Science Olympiad.

Ukiah High School Science Olympiad Team from the UHS STEM Club. They will compete in the Golden Gate Science Olympiad tournament hosted by Stanford and UC Berkeley students on February 20, 2020.