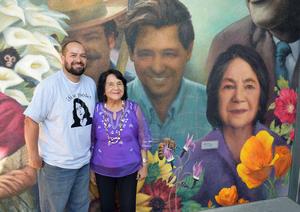 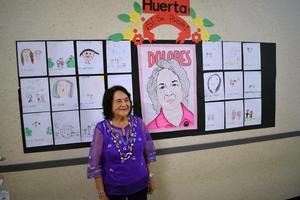 Students, staff, and families from Grace Hudson Elementary had the opportunity to meet and listen to a talk by Dolores Huerta, an American labor leader, and civil rights activist on Friday, September 13, 2019.

Huerta is the originator of the phrase, "Sí, se puede." She has received the Eleanor Roosevelt Human Rights Award as well as the Presidential Medal of Freedom and numerous other awards and honors for her community service and advocacy for workers', immigrants', and women's rights.

In 1955 Huerta became an activist when she co-founded the Community Service Organization (CSO) in Stockton, CA. This organization worked for economic improvements for Hispanics and led voter registration campaigns for farmworkers. Huerta met fellow activist César Chávez while involved with the Stockton CSO and together they formed the National Farmworkers Association which later became the United Farm Workers (UFW). Today, she is the Secretary-Treasurer Emeritus of the UFW.

"This was an amazing opportunity for our students," commented Kara Blanco, Grace Hudson Elementary Principal. "Students have been learning about Dolores and the work she has done fighting for the rights of farmworkers. It's great for them to learn about someone like Dolores and then get to meet her, hear her speak, and be inspired by her example. There's a good chance that the next Dolores Huerta was in the audience and heard her speak at Grace Hudson."

Throughout her long career as an activist, Dolores fought for safe working conditions, better pay, healthcare, and unemployment benefits for farmworkers. She helped organize the successful 1965 Delano strike of 5,000 grape workers and negotiated the resulting union contract. Her consumer boycotts of table grapes in the 1960s resulted in a union contract for workers and eventually led to the California Agricultural Labor Relations Act of 1975.

To learn more about Dolores Huerta, visit http://doloreshuerta.org/, or try a Google search using her name and look through some of the over 12,000,000 results.